Since its beginning, our universe has been expanding. The early work of scientists such as Edwin Hubble gave us proof that galaxies across the universe are moving apart from one another. Hubble’s law states, “Objects observed in deep space are found to have a red shift, interpreted as a relative velocity away from Earth.” The Dark Energy Survey (DES) seeks to help unravel the mysteries of what forces are causing this expansion by focusing on dark energy and how it constantly remaps the cosmos.

As stated by the DES collaboration, “DES is an international, collaborative effort to map hundreds of millions of galaxies, detect thousands of supernovae, and find patterns of cosmic structure that will reveal the nature of the mysterious dark energy that is accelerating the expansion of our universe.” Starting on August 31, 2013, researchers began taking data from a telescope at the Cerro Tololo Inter-American Observatory in Chile. This telescope has a 4 meter mirror and an attached 570 megapixel digital camera, called DECam. Over a five-year period, the observatory allotted DES researchers 525 nights of observation in order to complete a wide-area survey of approximately 300 million galaxies.

The amount of data produced during these observations is immense. According to the DES DR1 Data Release, this catalog contains, “over 38,000 single exposure images, close to 62,000 coadd images covering 10,388 tiles over roughly 5,000 square degrees within the DES footprint, resulting in nearly 400M distinct cataloged objects.” To sort through this data is no trivial task. Ken Herner, Application developer and System Analyst at Fermilab (working on DES Computing), tells us that analyzing this data is very memory intensive, as it includes massive amounts of cosmology simulation, among other types of analysis. 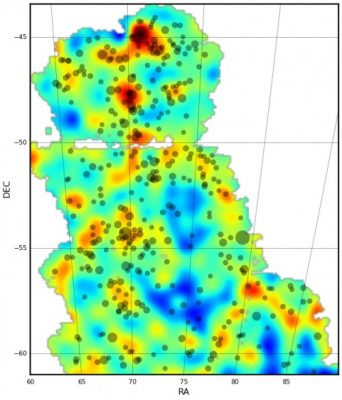 To help in these efforts, DES looks to the Open Science Pool to provide a portion of their computing power. Over the last year, DES has gained roughly 4.58 million hours (522 years) of computing from OSG. “The main areas OSG has provided resources have been to the TNO/dwarf planet work, and the LIGO follow-up efforts,” says Herner. TNO stands for trans-Neptunian Object, which is any is any minor planet in the Solar System that orbits the Sun at a average distance greater than Neptune, and LIGO is the “Laser Interferometer Gravitational-Wave Observatory,” which is best known for the Nobel Prize-winning direct observation of gravitational waves.

Herner expects even more DES workflows coming over to OSG in the next year. With year five of data taking having ended just weeks ago, Herner tells us that, “there will almost certainly be an extra half-year this fall to make up for poor weather in Year 3. After that, we’ll do final data analysis until ~2021.”

The research and analysis that DES has completed so far has exceeded expectations. Of the milestones so far, Herner states, “[DES has] the world’s most accurate dark matter map so far, competitive measurement of cosmological parameters (with even better results to come), the binary neutron star merger follow-up, extreme Trans-Neptunian object and dwarf planet discoveries, stellar streams in the Milky Way, to name a few.”

As stated before, by receiving more workflows in the future, OSG will become an even larger part of the discoveries to come. We look forward to helping DES further understand the nature of dark energy in our ever-expanding universe.